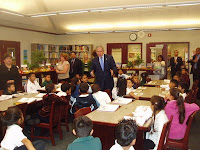 George Bush is visiting a school. In one class, he asks the students if anyone can give him an example of a "tragedy."

One little boy stands up and offers that, "If my best friend who lives next door is playing in the street when a car came by and killed him, that would be a tragedy."

A girl raises her hand. "If a school bus carrying fifty children drove off a cliff, killing everyone inside...that would be a tragedy."

"I'm afraid not," explains Bush. "That is what we would call a GREAT LOSS."

The room is silent; none of the other children dare volunteer.

"What?" asks Bush, "Isn't there anyone here who can give me an example of a tragedy?"

Finally a boy in the back raises his hand. In a timid voice, he says: "If an airplane carrying George Bush and His Team was blown up by a bomb, *that* would be a tragedy."

"Wonderful!" Bush beams. "Marvelous! And can you tell me WHY that would be a tragedy?"

"Well," says the boy, "because it wouldn't be an accident, and it certainly would be no great loss!"